Our plantation in Qionglai, Sichuan is where it all began.

In 2010, as a student in Beijing, I visited friends in Chengdu and they took me for a weekend trip to a friend’s plantation, 2 hours by car from Chengdu, 1300 meters up the first steps on the old road to Tibet, back then still on insane gravel and dirt roads steeply up the mountain. For the last 20 minutes the tea farm owner had to pick us up in his SUV.

Mr Deng, the owner, once owned a big trade company in Chengdu. Growing tea was a hobby project for him, he planned on retiring as a tea farmer since many years. But he wasn’t happy with the tea fields he owned – soil and air of the region were so polluted he had no chance to gain organic certification, no matter how much work he spent. And he didn’t want to work on anything that would always have to be less than perfect. 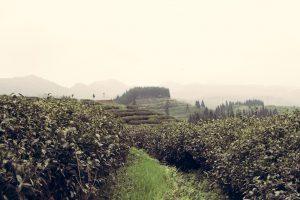 So when he, back in 2007, heard of an old state-owned plantation and former labour camp far up towards Tibet in a panda-reserve, but still reachable within two hours from Chengdu, he sold everything. His house, his company, his car. He bought an old Mitsubishi SUV he still drives today and then bought the plantation. A whole valley spanning several kilometers of length, including the old labour camp with it’s barracks and a few hectar with 80 years old trees, several further administrative buildings and a small old village. He got permission to extend the plantation to more than three times the existing amount of tea bushes and build a new production center as addition to the main old administrative building of the labour camp that he transformed into his home and a guest house with 10 rooms.

But how to get qualified workers to make very high quality tea in a region so far off? The village in the valley had a few dozen inhabitants, mostly old people. A tragedy brought him luck. He was old friends with the mayor of a village of the Qiang minority, an ethnical group who once, 3000 years ago, ruled most of central China, but were driven far up into the Himalayas on the border to Tibet by the Han Chinese already about 2000 years ago. 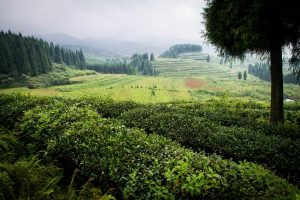 For the last at least 500 years most of them lived off growing tea for Tibetans, as most of Tibet lies too far up to grow tea, but due to the lack of vitamins in the Tibetans’ main food sources meat and grains, also fueled by the Buddhist monasteries’ endless thirst for tea needed for all kinds of long-lasting ceremonies, these areas halfway up, where the Qiang live, became Tibet’s main source for tea. And the Qiang, until today often living in very ancient looking villages dotted with ancestral towers, huge stone constructions used as lookouts but much more important as religious structures, were the Tibetans’ main suppliers, many villages until today completely live off this trade.

The big earthquake of 2008 that killed more than 70.000 people in the region caused a landslide, that did not cost lives, but completely eradicated the Qiang village of Mr Deng’s friends including everything they had, their houses and their tea fields. Mr Deng made them an offer and they accepted. So the whole village resettled to his valley. He helped them build, gave a plot of land to each family – and they helped him build up his plantation. Now all his workers are from the valley. He helped several of their children to go to university, two of them studied tea growing and processing, came back and help him build up a modern and professional plantation and processing plant. You can’t find better tea growers in Sichuan than the Qiang, nor a more beautiful – and especially cleaner environment to live in and grow tea than Mr Deng’s valley up in the mountians above the old town of Qionglai. Everybody is like a big family. One day, I’ll just stay there. 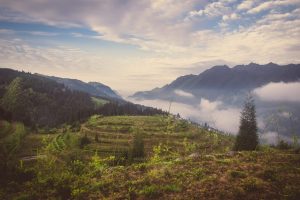 Actually, if I say this is possibly one of the cleanest tea plantations in the world, I mean it. As the labour camp was very secluded, with no other farming or human activity allowed around it’s edges, there is not the slightest soil disturbance from anywhere around. Further up is only forest, a panda reserve and finally the highlands of Tibet. To get further down, you first have to cross another ridge sealing off the valley towards the outside world – and Chengdu’s plume of dirty air. And that mountain still is a natural reserve with a few very small old villages. But the most important factor again lies in the history: as the farm before Mr Deng bought it used to produce tea solely for government use, even the slightest trace of dangerous chemicals have never been used here. No chemical pesticides, herbicides, fertilizers. No major amounts of traffic ever reached the valley. Not even many heating chimneys have run here. Until today, the facility has been mostly vacated during the cold winter months. Many rooms even now don’t have a heating. You get a heated pad in the beds instead, so you can enjoy the fresh mountain air with open windows, but still don’t freeze. Amazing spicy and gingery 100% locally grown food from the plantation’s amazing kitchen staff and a lot of fresh hot tea help too. 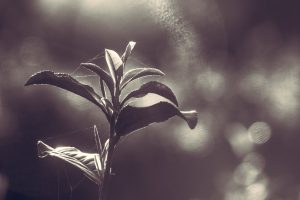 Today, with all organic certifications available and even though still not fair trade certified, as all European fair trade certifiers due to the political circumstances refuse to certify any facilities in China, the farm is a little piece of heaven on earth. Very busy during the picking times in spring and fall, completely overgrown and full of insects and birds in summer – Around the old bushes, Mr Deng does only cut down plants that are not tea plants as much as possible to reach the tea plants, and he only does so just prior to picking season. This way he can almost completely eradicate erosion to the soil – and I believe it improves the taste of the tea a lot too. Leaf-eating insects are anyways not especially common in these heights, and if some fresh leaves have bite marks, they are left to grow or be eaten. It’s anyways not more than 10 to 20% of loss. And all the other flora and fauna provide sufficient fertilization to the old trees. The young trees mostly get fertilized with dung of the village people’s grass and organically fed goats and the work horses helping with works in those many areas of the plantation unreachable by heavier equipment. His tractor Mr Deng sold again quickly – it’s anyway of close to no use on the steep slopes. 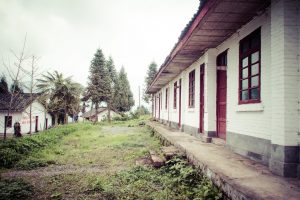 The next step now is transforming the old labour camp’s barracks into further simple guest housing and a tea education center. Together with another old Chengdu friend, we are working on plans to bring groups here for weekend or weekly stays, learning about tea growing and processing, for yoga or taiqi-seminars or just as  a cozy hideaway with lots of things to do every day if a guest does not want to just hang out, enjoy the view of the clouds slowly breaking up through the valley each morning, the smell of freshly made tea mixing with the insanely crisp and beautiful mountain air.

I will this fall picking season, and again in spring 2019, be organizing a first tour bringing a small group of European and American customers and friends to this farm and onto a tour of a some of Yunnan’s most beautiful old tea mountains. It will be limited to 6 people in the first go to guarantee a minivan is enough to get around and be able to stay in smaller guesthouses on the mountains. If you are interested, please contact me directly! 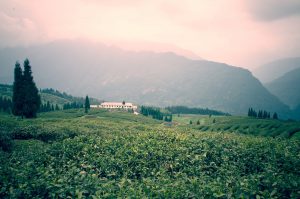 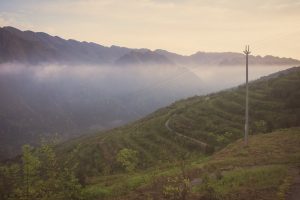