In spring 2019, we tried something new. After visiting the plantations every year for up to 8 years, having lots of new discoveries and many adventures each year anew, we felt it’s time to take a small group of customers out to the plantations while we go sourcing. And it went well. Not all as planned – but I’d say rather better than planned, as we once again made many interesting new contacts and I’d say saw even far more than we had expected. And we definitely want to do this again. So we start planning next year’s trip from now on – if you want to reserve a place, be fast, they will again be limited to 6!

You will be able to choose if you only want to join us for a week, for two weeks, or for the whole thing. Also in the middle of it. For now the dates are still rather flexible, trying to be there as much in the middle of the picking season as possible. And if I should have far too many requests, I will see how and if I can do two tours of some regions.

Prices are mostly depending on the places and accomodations we choose to head for as well as the size of the group. For example the per person price for people staying together in a double room will sure be quite a bit cheaper than for someone in a single room, as most Chinese hotels do not offer much cheaper single rooms. Also, we can together choose from a few options that are often quite different in price. I will discuss those points, such as places to go and standard of hotels with everybody joining in and then calculate an all-inclusive weekly price. It will probably be between 1000 and 2000 € per person per week including good accomodation, good local food and transport by a rented minivan, partly wth including a friend as a driver, but excluding the flights to and from China (from most places in Europe return tickets are around 500-600 Euro) and visa (around 120 Euros) depending on each week’s destinations.

Every week starts and ends in a city with an international airport I can pick you up from.

Sure you can stay in China longer before or after and I’m happy to help you plan that a little and help with visa issues, the best flight bookings, hotels etc. free of charge. 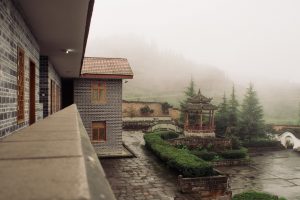 The itinerary so far is as follows: 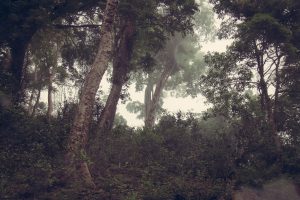 Old tea bushes in the shade of the rainforest on Jingmaishan

First and second week: end of March/beginning of April: Round-trip of some of Yunnan’s most interesting tea areas 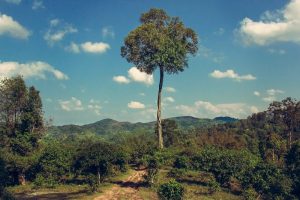 In cooperation with the wonderful people from Eastern Leaves, a Milano/Italy and Yunnan based couple growing their own pu’er and black tea in Southwestern Yunnan, we want to bring you the deepest into the Yunnan tea making areas probably any Western tour group have ever gone. We will on one hand visit their farms and production facilities and on the other hand see the places our own Yunnan teas come from – Pu’er, Jingmaishan and LIncang. And it is still getting better: Dan Ni, our tea producer will join us for the whole trip and help us organize. That means a lot. While he makes some of the best black teas in the worlds, as his main profession he is a brand designer. As such he has worked with a lot of Yunnan province’s hotels, restaurants, provincial governments etc. and also, as a tea dealer and producer has worked with more than 50 different farms all over the province, so travelling with him can give us an experience hard to beat, seeing some of the most interesting, furthest off tea production areas in the country while at the same time being able to stay very comfortably for a fraction of the regular price. Conveniently he also owns two minivans we can use, so transport is not an issue neither. 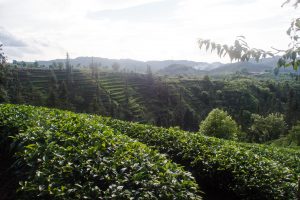 The tea hills at Pu’er, where a lot of our black teas are from

We are still discussing how long this part of the trip shall take. We could see a few good places within a week, but as driving in, out and inbetween the places already costs a lot of time, we don’t think it would be enough. Two weeks would be perfect, we might get down to 10 days approximately. Or offer an extra week ahead as an optional bonus. Even just Yunnan would clearly be possible then.

The price is not fixed yet, very much depends on accomodation as well as the amount of people, but you can probably calculate a little above 2000€ for an all-inclusive, two week experience. 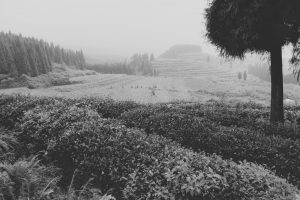 Third week: beginning of April: A course in tea-making on Mr Deng’s farm in Qionglai, Sichuan

Mr Deng produces all our beautiful green and white and black and yellow and dark Sichuan teas. All from the same plantation, probably one of the cleanest and most beautiful on earth. So who else could teach you better how to make a really good tea – from the basics on? Conveniently he also has a guest house up there, simple but comfortable, complete with decent homemade, locally grown food by his chef. 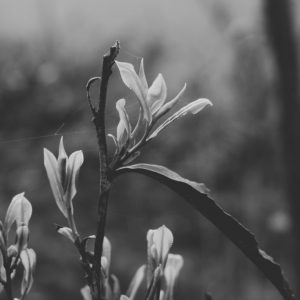 So that, from Chengdu, Sichuan up around 1500 meters towards the Tibetan mountains, is gonna be the place we stay at for the second week. We will do every from the picking to the final roasting ourselves and learn a lot about growing tea and whatever else you’d always like to know from a master tea producer.

Inbetween the courses the area has some beautiful waterfalls, forests and other nice sights to visit

If you are interested I am also planning a visit to another organic-certified plantation a daytrip away from Qionglai, whose owner I met this year and always wanted to visit. We won’t be bored.

Costs, all-included will be around 1200 € for this week, it can be easily booked without joining us for the other parts of the trip too. 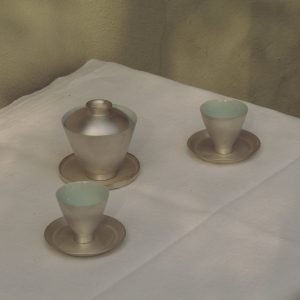 This week will be a lot more exploration, for us as well, but we will also meet some old friends.

It will start from Jingdezhen, the porcelain capital of China, nowadays a refuge for all kinds of young artists, where we will stay in a good old friend’s

guest house and then probably head towards Anhui, home of probably the highest amount of different famous tea varieties in all of China, Huangshan Maofeng, Taiping Houkui, Lu’an Guapian, Qimen/Keemun Black tea, Anji Baicha just to name the most prominent.

Or Guizhou, a so far very little known tea province – even though the oldest trees outside of Yunnan and far too many undiscovered pearls come from here.

This is discussable and we will keep you updated on our plans. 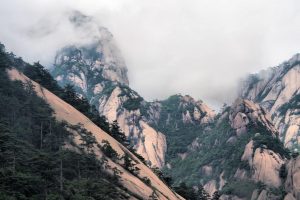 We will probably just book accomodation, collect some contacts and see where the journey leads us.

Price: very much depending on these decisions. Generally probably within the price range of the other weeks, between 1000 and 1500 € all-inclusive.

Next Post (n) NEW TEA STILL NOT IN GERMANY